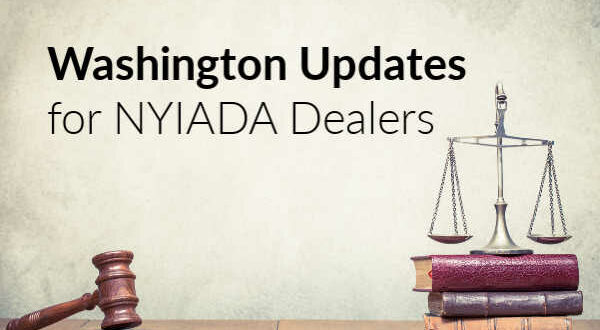 NIADA is your voice in Washington D.C., advocating for independent dealers, the used vehicle industry and small business. Here’s a look at the latest news and NIADA efforts regarding legislative, regulatory, PAC and grass roots activities.

FCRA bills advance in House: Just before the end of 2019, the House Financial Services Committee reported two bills that would amend the Fair Credit Reporting Act for consideration by the full House of Representatives.

The bills were among a series of proposals designed to overhaul the credit reporting process that were passed by the committee earlier in the year.

It would also grant credit relief for student borrowers who took education loans when the lender engaged in fraudulent activity.

The Improving Credit Reporting for All Consumers Act (H.R.3642) would impose new requirements for conducting reinvestigations of consumer disputes and allow consumers to appeal the results of reinvestigations, as well as requiring furnishers to retain records to substantiate the accuracy and completeness of furnished information.

It would also ban misleading and deceptive marketing of credit scoring products and services as well as automatic renewals for promotional consumer reporting products or services.

USMCA: After more than a year of debate and negotiation, the United States-Mexico-Canada Agreement – President Trump’s replacement for the North American Free Trade Agreement – was approved by the House in an overwhelming 385-41 vote.

The Administration’s signature trade deal now heads to the Senate, which is expected to ratify it. If it does, it will deliver on one of Trump’s major campaign promises – updating NAFTA.

The deal earned bipartisan support and was praised by business leaders and labor unions.

USMCA tightens rules of origin for auto parts and requires a larger share of cars to be made by workers earning at least $16 per hour, a provision intended to keep American automakers from relocating factories to Mexico because of cheaper labor.

The Federal Trade Commission has made data privacy/data security one of its highest priorities, something it made clear last year with a proposed revision of the Safeguards Rule that would tighten the requirements to be included in the comprehensive information security program mandated by the rule and require encryption of all customer data as well as access controls and multifactor authentication for consumer data.

NIADA has submitted comments on that controversial proposal.

In the meantime, the FTC has already displayed its increased emphasis on data security with a series of enforcement actions – notably 2019 cases against Facebook, Equifax and dealership software provider DealerBuilt.

Smith said the commission has made its orders more specific in response to court rulings that struck down previous data security orders as too vague, as well as increasing the accountability of the third-party assessors it uses to verify compliance and elevating data security considerations to the highest levels of the corporate structure.

Cuellar is a longtime friend of the auto industry and was a featured speaker at the 2016 NIADA National Policy Conference. Riggleman and Gonzalez both serve on the House Financial Services Committee, which has jurisdiction over legislation regarding the Consumer Financial Protection Bureau.

Last month, NIADA leaders were able to meet with Rep. Cuellar at a fundraising event for his campaign in San Antonio, Texas. We appreciate our friends at Manheim San Antonio for hosting the event at the auction.

With the new year now well underway, state legislatures across the nation are now in session.

Several issues of interest to dealers are expected to be discussed in State Houses this year, including data privacy and data security, technology and its use in the automotive industry and regulation of Internet sales.

We’ll also be watching for legislation that could impact the F&I office, such as all-in rate caps and disclosure requirements for voluntary protection products.

As always, NIADA and its affiliated state associations will be monitoring proposed legislation and advocating for the interests of independent dealers, the used vehicle industry and small business.